GreatAwakening
Communities Topics Log In Sign Up
Sign In
Hot
All Posts
Settings
Win uses cookies, which are essential for the site to function. We don't want your data, nor do we share it with anyone. I accept.
DEFAULT COMMUNITIES • All General AskWin Funny Technology Animals Sports Gaming DIY Health Positive Privacy
139 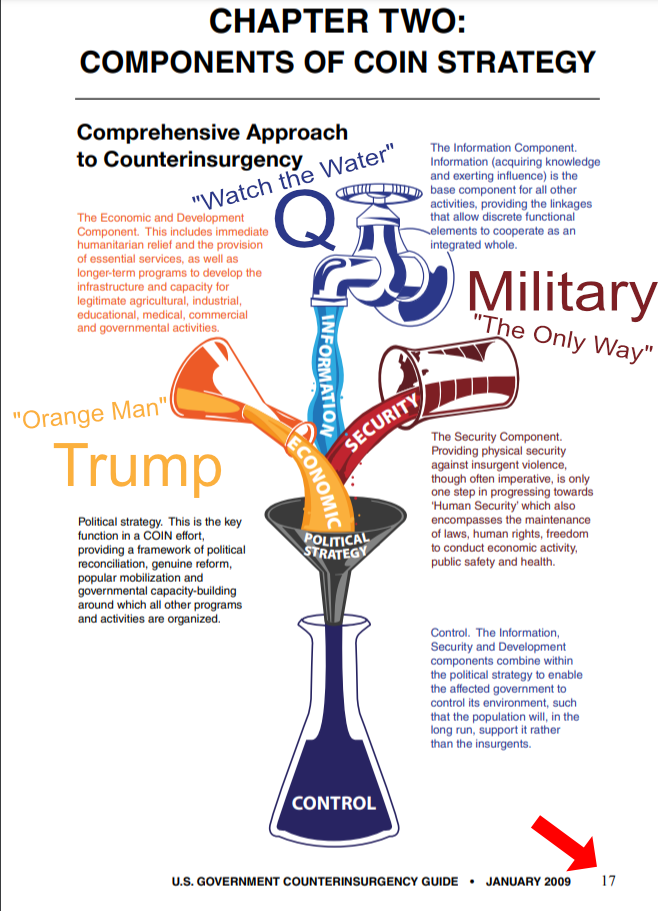 Q is literally giving you the playbook that made the operation.

Q is a small aspect of the intelligence arm of the Counter Insurgency taking place under the US Military heads' jurisdiction.

What Q is doing checks all the boxes in the COIN method of increasing faith in the government and establishing a group that is trained to quickly get on top of the Propaganda Media.

Q is tracking with this section exactly:

To enhance the legitimacy of the affected government, messages aimed at their population should be closely coordinated with and ideally delivered by their own officials (Trump and Patriots like Flynn, who frequently gave/give confirming proofs). Themes and messages should be simple and memorable, and must resonate with the population. This requires detailed understanding of the COIN environment which must be continually updated. Detailed target audience analysis is required for each separate population group and reliable measures of effectiveness must be sought to assess the success of messages and if necessary recalibrate them.

Being proactive gives a significant influence advantage, since the first impression or report of an event that reaches a population will often receive the widest exposure and will subsequently be most resistant to alternative accounts. The insurgents that are most effective in this field design whole operations to support their influence themes. Successful COIN requires an approach to influence which is similarly proactive, entrepreneurial and prolific in ‘selling’ messages.

That said, the imperative to counter insurgent messages demands a reactive element to our influence activities. Speed is of the essence. The longer it takes for a rebuttal, denial or counter-message to be released, the less relevant and effective it will be. Cumulatively, whichever protagonist (insurgent or counterinsurgent) is fastest at processing the cycle of messaging will have a significant advantage in gaining influence. Some of the counterinsurgents’ delay in response will be derived from the need to investigate events and establish facts (a constraint from which insurgents are often exempt), though a holding response is generally preferable to silence. Less justifiable is the delay inherent in lengthy approvals processes.

The time sensitivity of reactive influence requires counterinsurgents to employ delegation of authority (crowdsource military research and propaganda denial), universal understanding of the narrative and a degree of risk-tolerance throughout the command chain.

The ONLY way the Military could effectively succeed in the battle for narrative control is to create a massive thinktank that could counter the Media's narrative supremacy faster than they can spin lies up. There is not enough money in the world to do that, even if they could keep the thinktank hidden and safe from spying insurgents.

The Q Operation is a grass-roots/crowdsourced thinktank used to counter Propaganda narrative shifts and to disseminate the Truth and whittle apart the lies.

The only group you can target that has the abilities, tools, and wherewithal to take down the Media's Propaganda are shitposters.

The cover of anonymity on boards like 4Chan and 8kun allowed for uncontrollable passage of ideas. By recruiting this group, and giving them a literal game/puzzle to solve, Q conditioned them psychologically to find reward in taking down Propaganda lies.

Q is a Military Operation, plain and simple. The strategy has been used before, but never domestically, at least to this scale. Probable deniability is essential in protecting all parties involved, and is used extensively. That some are questioning if Q is real or not is the greatest defense Q has, and is a necessary component of the Counter Insurgency. The Government must look like they are in control, not the Counter Insurgents.

If the Media could prove 100% Q is real and that Flynn or Trump are responsible for the Operation, they would immediately be able to claim their victory -- being able to levy charges against Patriots under pretenses of a coup. There is a fine line between Insurgent and Counter Insurgent, and domestic fights heavily muddy those waters.

If you can't see it after reading through the guidelines and piecing it together, then guess what...

You don't have to.

The Operation is a success, Anons autonomously act to counter Propaganda as they were trained to do, Q no longer needs to post, and the People of the United States are swelling with Patriotism in a way never before seen.

Read the manual through, and you'll know. We won.

The population-centric approach has worked. The Insurgency is over. There is no way they can reverse the Patriotism and support of the Nation. They can't work fast enough to divide us. There are too many hands against them.

It's over. The DeepState is dead.

To all those with doubts:

Q being a LARP is FAR TOO EFFECTIVE for it to be a guy in his basement. Had there been no Q, we would not have this swell of Patriotism and anti-Propaganda sentiment in the common population. Admit it, even if a LARP, Q has been overwhelmingly positive for the fate of our Nation.

Anons are the world's most powerful meat computer, and we are undefeated & unhackable.

So...Legos have nothing to do with thiss then...

That, and the original was a reference in Q posts is to the North Korean liberation from the Cabal thanks to Trump.

In a photo op with Kim Jong Il during the Cabal's control over them, there was a mural of a waterfall behind them.

In a later photo op with Kim Jong Un after Trump's visit, the water was a calm ocean sunset.

It signified that the waters in North Korea have settled, and are at peace. That's a far more impactful philosophy in Korean lore, so it goes over most people's heads on how significant it really is.

Have been preaching this since q posted about it. You can neatly put most of what we see into the five pillars.

Q drop 34 has only mention of Emergency Broadcast System activation... it is also the first Q drop with the 11.3 & 11.4 markers indicating chapter / section in the Law of War manual.

We will be initiating the Emergency Broadcast System (EMS) during this time in an effort to provide a direct message (avoiding the fake news) to all citizens.

On POTUS’ order, we have initiated certain fail-safes that shall safeguard the public from the primary fallout which is slated to occur 11.3 upon the arrest announcement of Mr. Podesta (actionable 11.4)

Here is that video by the Kiwi who did the in-depth Law of War - Q drop analysis.

“that our efforts must be directed to the creation of local and national governmental structures that will serve their populations, and, over time, replace the efforts of foreign partners;”