GreatAwakening
Communities Topics Log In Sign Up
Sign In
Hot
All Posts
Settings
Win uses cookies, which are essential for the site to function. We don't want your data, nor do we share it with anyone. I accept.
DEFAULT COMMUNITIES • All General AskWin Funny Technology Animals Sports Gaming DIY Health Positive Privacy
27 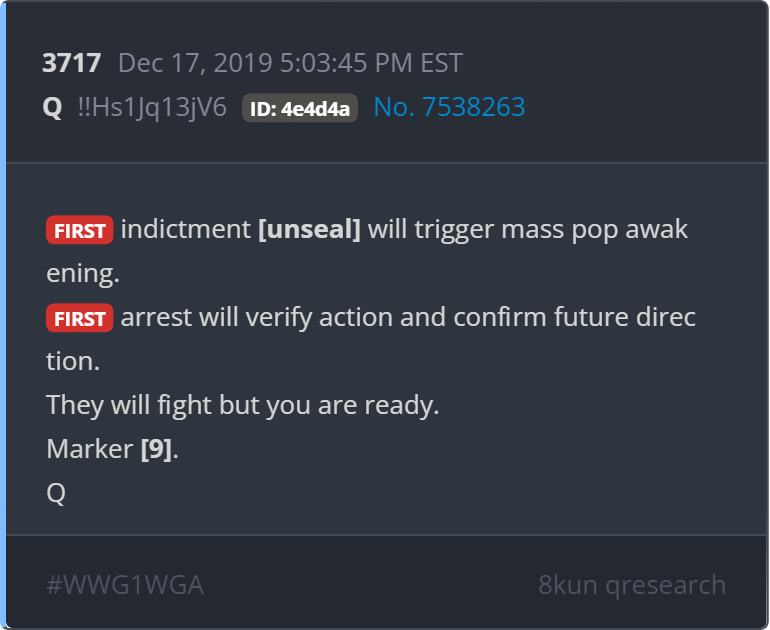 Nope. It's not Trump. It's someone else.

Imagine if it were Biden. It'd by far be the most hilarious possibility. I'd probably die laughing. It's not going to happen, but it's fun to think about.

I’ve never been a fan of the first arrest being Trump. But. It does open the door to the idea of an arrest of a previous president.

IDK, seems the Left wants Trump in jail so he cannot run in 2024. Plus, I really don't see handcuffs on Biden, Barry, HRC, or Bill while the FBI is out playing games. If Trump is arrested that will piss off a whole bunch of non-Trump lovers who value truth and justice more than idiology. We shall see.

you have to be bonkers to think this refers to trump. why do people keep going there?

Gotta be W or O

It is not Trump. They will fight but you are ready would not make sense there. If Trump is arrested there is no need for them to fight.

Obama is who should actually be arrested.

Reflecting on this issue, I would have to concede the fact that Q does not indicate WHO the first arrest would be.

From day one we always considered it to be someone else but Trump. I recognize that it is a blind spot because, in essence, I do not like such a parade .....

But on the other hand ..... it would .... cause .... tremendous consternation and mass awakening. And why not? The insulation would be on AF1, right?

Thinking further, we are confronted with lawless people, hiding inside organizations meant to perform a public service. These people, acting outside of the bounds of the Constitution and the law, are pirates.

Do pirates " arrest" people? What is an arrest other than a legal kidnapping, or hostage taking. Is that so hard to imagine? Due process of law is the deciding factor. Not every arrest sticks .....

It makes for good TV. Remember Roger Stone? Expand on it and apply it to Trump. What would happen? How would you feel? How would that influence society and the public functions we came to rely on?

And does running for President shields one? There is a Q post on that particular subject. Q2219 and Q

Further, would this not make visible COG? A hostage taking of the real Commander in Chief? How would that influence the military as the only way: clean and swift?

What happens if 44 is actively running a shadow command and control [shadow presidency] operation against the current duly elected POTUS?"

Would such a thing not also show: who is loyal and who is not?

Stay with me deplorables, you' ll like how this ends ....

So, I have come to the point where I do no longer exclude such a possibility. Is it probable? It would be very daring indeed.

How about a nice game of chess.

Do you attack the king at the beginning of the game?

Do you attack and remove pawns first?

Do you attack and remove bishops, rooks, knights next?

Do you attack and remove queen mid-to-end?

Is the game being played public or private?

Add: how do you set the stage [board] re: public opinion [optics]?

For those not familiar with chess: goto yewtu.be find the channel: Gotham Chess. Start with the oldest. one of the best explanations on how to play chess. You can improve your appreciation and skill at this game in just under 3 episodes.

Have thought about this (your post) as well, and believe after the FBLie raid it has a reality about it. They know it would likely cause a possible civil war, maybe starting as small outbreaks, and the DS desperately need it.

Midterm cover is what is needed now by the DS, anything from another virus to martial law.

It is a possibility, and even if it's a bluff it would mean Trump would be insulated.

I like your analysis. Indepth and well thought out assessment of how the game is being played. There are moves being played behind the scenes, both white hats and black hats, but there never seems to be a step taken by the white hats to defeat the black hats, thus my reference to behind the scenes moves. I guess sometlmes I want a win for the good side to be broadcast far and wide so everybody can see we are winning.

I guess sometlmes I want a win for the good side to be broadcast far and wide so everybody can see we are winning.

Not Trump, the Biden puppet. It will be reviled he's NOT even the real Biden. Want to see heads explode?

Read all the posts from December 17, 2019 and you’ll probably come to a different conclusion. Most of the posts that day are about FISAGATE.

Reading this post from Dec of 2019, the White Hats had to know their playbook in order to publicize to Anons the knowledge of their plan.

Mass population awakening? We see all these agencies/lawyers going after Trump, but they are always very 'public' about reporting on it in the Fake News propaganda machine. What grand jury evidence from way before this post of Dec 2019 would make the unsealing now be connected with Trump being arrested as a result of the evidence/crimes committed?

Who did the investigation, who requested the evidence to call for a grand jury? Was it John Huber and his team out of Salt Lake? Remember, Huber turned his findings over to Durham some time ago.

We see people are speculating the first arrest will be Trump and the FBI raid on 8/8/2022 could lead to an unsealing of the indictment. But that doesn't make sense considering the Dec 2019 date of this post. Trump had already been exonerated of their so called impeachment crimes. That everything 'they've' tried to this point of 'getting Trump' has failed.

Currently we see outrage even amongst Dems and Rinos over this extreme over reach and political tactic by the FBI raid. Is it not likely Trump is arrested. (I could be wrong, due to their ruthlessness to get Trump, who is basically the bull horn for We, the People against 'The System.')

Who will be outraged? The Dems/RINOs over their praised/prized politician/public figure. Who can speculate this person? Hillary, Pelosi, George Soros, Obama, Bush, Biden? These are the top corrupt 'players'. Second tier; Schumer, Schiff, Wasserman-Schultz, Cheney ...

We see the reports of Pelosi activating the Capitol police nationwide. Now we have the weaponized FBI. Will they weaponize other agencies like the Secret Service and US Marshals for their independent Militia against the American publc? It seems this is their game plan. Who else will they weaponize? ANTIFA, BLM, the recent Illegals from their human trafficking initiative?

Are We Ready? Is Trump, the true Commander-in-Chief (in Exile) ready to allow the Military under Devolution to fight against these corrupt insurrectionists and traitors?

A FEW WEEKS AND TIME WILL TELL...

No Bad Behavior!
No doxing, including revealing personal information of non-public figures, as well as addresses, phone numbers, etc. of public figures. All GAW users must adhere to the highest standards of conduct, whichever .WIN they are on. If we are notified by other moderators of incivil behavior on other .WINs, you WILL be banned here!

Expand your thinking:
Remember, this .WIN is the public face of the Great Awakening, and, as a member here, you agree to represent the Great Awakening movement against Globalism, Communism and Progressive Insanity in the best, most positive way possible. NOTE: Your comments and posts may become news. Keep it classy!

-No fame-fagging; no, "your" post did not get removed! Were you the original author?? Eyes on the prize, people!

-Handshake noobs will be scrutinized by their Q knowledge, sincerity, and respect.