GreatAwakening
Communities Topics Log In Sign Up
Sign In
Hot
All Posts
Settings
Win uses cookies, which are essential for the site to function. We don't want your data, nor do we share it with anyone. I accept.
DEFAULT COMMUNITIES • All General AskWin Funny Technology Animals Sports Gaming DIY Health Positive Privacy
105 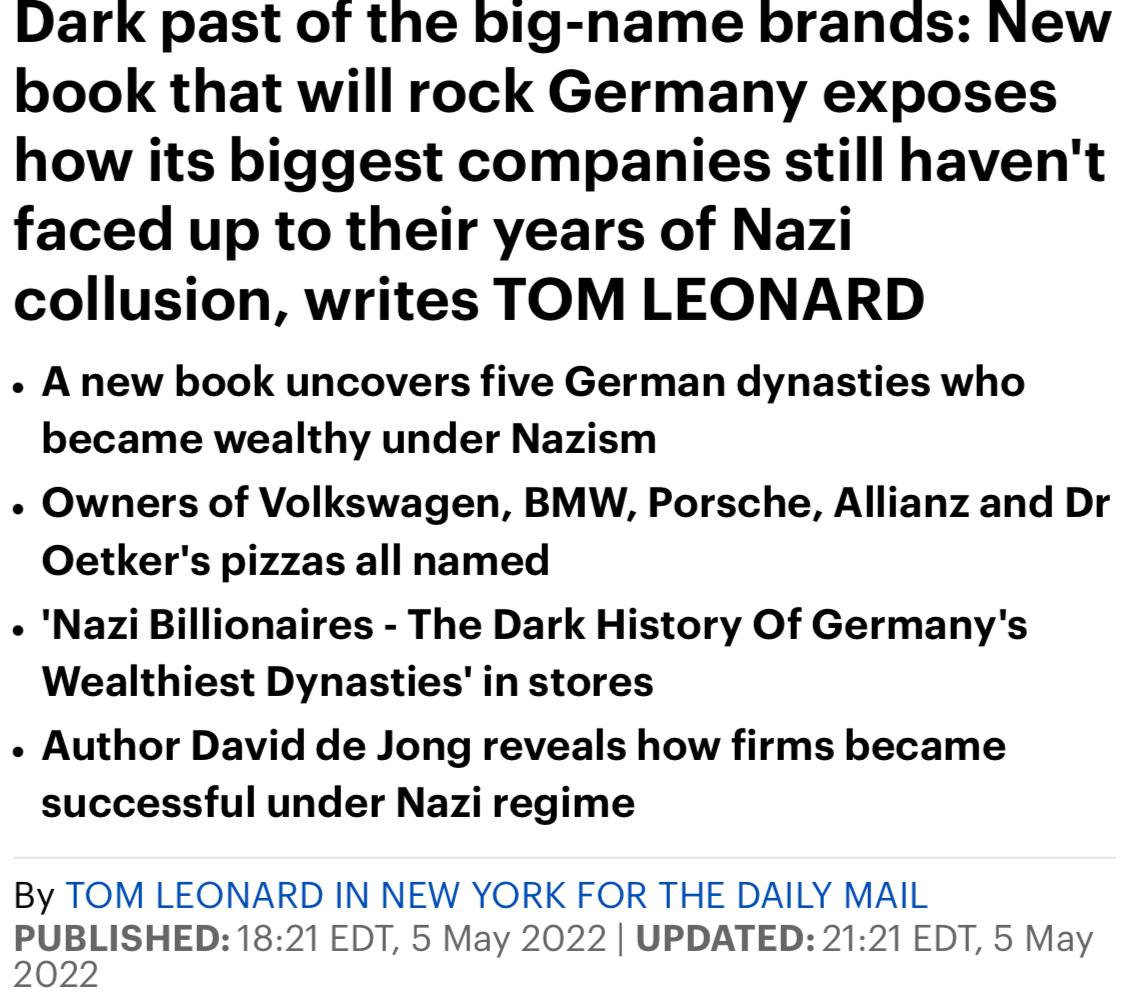 The Gestapo,SS and military officers uniforms were all designed by Hugo Boss. It wouldn't be a lie to say that the nazis were the most sharply dressed army in human history. Ferdinand Porsche designed the Volkswagen Beetle (check how VW's logo used to look like in the 30's) and the Tiger I and II tanks.

…the Quandt's of BMW; the Flicks who once controlled Daimler-Benz (now Mercedes-Benz); the Porsche-Piech family who control car giant Volkswagen; the von Finck's, financiers who co-founded Allianz, the world's biggest insurance company; and the Oetkers, whose business empire stretches from Dr Oetker frozen pizza and cake ingredients to luxury hotels such as London's Lanesborough.

The man who ran the Oetker empire during World War II was an officer in the Waffen SS who trained at Dachau concentration camp and kept Nazi forces supplied with instant pudding. You won't find that on the label of a jar of Dr Oetker's Fairy Sprinkles.

Britain, the U.S. & France deserve some of the blame, he says. For the sake of 'political expediency and to counter the 'looming threat of communism', the victorious Allies handed most of the tycoons back to Germany, which allowed the majority of them to walk free.

Cancelling companies for what they did 80 years ago is just cancel culture, but it's okay because you virtue signal about how bad nazis are?

They go any farther back in German history and I'll be pissed. Germany gave us Bach, Beethoven, Mozart and Brahms. Doesn't get too much better than that.

At this point, what difference does it make?

There is a pizza billionaire in germany?

Nazism was the political and economic system of Germany since 1933 through 1945. There were no options. If anyone managed to do well, they did so as a Nazi. They couldn't be anything else. It is also inevitable that the largest industrial firms would have been contractors to the war effort. You don't produce fighters and bombers from Grandma Olga's sewing shop.

Now, firms that became wealthy from slave labor, that would be to condemn.

I think these car companies have already been called out to make amends to Jews who were forced to work at these places in the 80s.also Mitsubishi made Japanese zero and Kawasaki and Nissan made war machines also.

They're here, they're there, they're every-fucking-where. And everyone bought the lie that the Nazi's lost. Including me. I'm a little pissed.

Bums me right out that Mercedes-Benz is involved. Damn!

Agreed, probably because they were taken over by marketeers and the engineers were pushed aside. Our 83 300D diesel has 393,000 miles on it and still has the original engine. Although the jack points are rusted and the rear axle has slop in it, it's always ready to go.

Yes, basically they were in trouble with old-world economics etc. The engineers were no longer in charge and cost-cutting became the norm - and this was in the 90s when things were downhill for ze Germans exchange-rate wise etc as well - Lexus was a serious threat on the luxury end and all the Japanese makes had sports cars well undercutting Porsche on performance/price ratio (not to mention the Corvette finally had its act together, sort of). Toyota came in and helped with process but apparently they didn't really grok that Toyota also manages to control both cost and quality, and it's never been the same since....

Just interested to know.Apart from that it's a good engine.

No problems with the camshaft or the valves. I've haven't heard that.

The only thing I can think of is that the lifters are mechanical and they need to be adjusted every 15,000 miles. If not, then the engine begins to run rougher and rougher.

It sounds like your camshaft should be good. You can inspect it by removing the engine oil filler cap on the valve cover( Note: Engine NOT Running!)

Again, with engine NOT running, look down with torch at cam lobes for signs of excessive wear and you can feel with your finger. Minor wear is really nothing to be concerned about.

From the late 1970s up into the mid 1990s we were replacing worn camshafts, rocker arms and even the valve springs!

Then in the mid 1990s, a senior technician in Mercedes Benz New South Wales, (Australia) said" fellas, I'm not telling you this, but with the camshafts on the 300 D engines, get the new camshaft and rocker arms treated at an engine reconditioner or machine shop to surface harden them, that will fix the wear problem"

The problem was Benz didn't surface harden the cam lobes and rocker arm contact surfaces properly and as on cold start oil takes around 10-15 seconds to get to the top of the engine, wear would happen.

Don't worry about this,if your camshaft is still good and you have had the vehicle for a while, you camshaft has been treated by the factory or after market.

Another thing to keep your eye on is the vacuum shut off cell on the end of the injector pump( round anodised, gold coloured can like vacuum cell with rubber hose and plastic vacuum line connected to it)

If left in this state, engine oil will be draw up the vacuum line to the ignition switch and cause engine oil to leak out under dashboard.

Also keep an eye on the large vacuum hose going from the engine mounted vacuum pump to the brake power booster unit.

The diaphragm in the engine vacuum pump can fail and engine oil can be draw up into the power booster unit.

Also keep an eye on reverse gear. Delayed engagement or shuddering can be caused the band adjuster becoming lose, usually easy to repair.

Those are some of the common problems with the 300 D. With good servicing, there are usually minimal problems. The 300 D is a good vehicle.

Thanks for all the information.

Over the years I caroused the 616/617 diesel forums on the web so it's always good to get more info, thanks.

Mercedes put special exhaust valves on these 617 turbo diesels. THEY WERE different from the non turbo 617s. I believe they had chromium in them. MBZ really strived for excellence. With that in mind it boggles the mind why they wouldn't do something as simple and necessary as hardening camshaft lobes.

The only thing I replaced on it was the engine vacuum pump, and that's only because I managed to procure a new factory pump for free and put it on for the hell of it.

There's a little rust, some lag in the rear axle, a few water leaks (easily fixed with bleach because the drainage lines get gummed up). Other than these few little nagging issues the thing has been solid as a rock.

I'll disagree with you there. Still simply the best.

LOL you can disagree all you want but "the best" is... a bold statement.

Ikr. I may not make a statement like that if i wasn't sure. ;)

Gee whiz, large German companies that did (in many cases, had to) business with the Nazi regime? What a shock. I'm not saying it's great but this is hardly a huge revelation.

BTW I'd have to dig but IIRC Dr Porsche (the first one, that did time in French prison and died relatively soon after release due to complications from it) wasn't terribly pleased about having to do so....

Conspiracy theorist in me says if this is book is allowed or pushed in the MSM it is to get ahead of Ukrainian nazi groups become a widely known fact somehow. So the dumb people can say “well shoot, those great people in the book aren’t bad people and they supported literal hitler, I must not be so bad for having flown a Ukraine flag during a war”

Yea cause this is what we should be focusing on in 2022. Jfc. Lmao

Ever heard of Multitasking....

They didn't say "solely" they are pointing out that, amazingly enough, many large German companies did things for the Nazis, and it's hardly worth attention now.

I mean look at how many companies do business with the US gov't now - are we going to (say) boycott them all?

It was close to 100 years ago. Hitler can't hurt you anymore fren.

Oh fuck this. Even time magazine had Hitler as their man of the year. Gas Chambers were a fucking hoax. The nazi did commit other war crimes, but so did the allies.

Agree with the reply but the Time cover does likely mean Time has been shit for a lot longer than many if not most of us suspected.

No it means, Hitler brought Germany back from the brink of Marxist destruction, and he deserved to be on the cover of Time magazine.

These companies didn't know at the time the atrocities of the Nazi's. Trying to cancel companies for something they did 80 years ago is cancel culture at it's finest, and we shuld reject virtue signaling posts like these.

does anyone really give a shit?